Guns, germs, and steel [the fates of human societies] 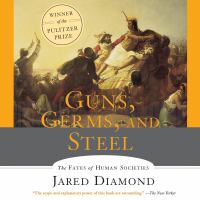 Is the balance of power in the world, the essentially unequal distribution of wealth and clout that has shaped civilization for centuries, a matter of survival of the fittest, or merely of the luckiest? In Guns, Germs, and Steel, UCLA professor (and author of the best-seller bearing the same title) Jared Diamond makes a compelling case for the latter. Diamond's theory is that the predominance of white Europeans (and Americans of European descent) over other cultures has nothing to do with racial superiority, as many have claimed, but is instead the result of nothing more, or less, than geographical coincidence. His argument, in a nutshell, is that the people who populated the Middle East's "fertile crescent" thousands of years ago were the first farmers, blessed with abundant natural resources (native crops such as wheat and barley, domesticable animals like pigs, goats, sheep, and cows). When their descendents migrated to Europe and northern Africa, climates similar to the crescent's, those same assets, which were unavailable in most of the rest of the world, led to the flourishing of advanced civilizations in those places as well. Add to that their ability to control fire, and Europeans eventually developed the guns and steel (swords, trains, etc.) they used to conquer the planet (the devastating diseases they brought with them, like smallpox, were an unplanned "benefit" to their subjugation of, for instance, Peru's native Incas). The program uses location footage (from New Guinea, South America, Africa, and elsewhere), interviews, reenactments, maps, and Diamond's own participation to support his thesis.