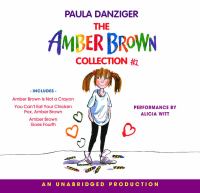 Three tales featuring Amber Brown; in the first, Amber copes with her best friend moving away; in the second, Amber travels to London with the hope of reuniting her recently divorced parents; in the third, the plucky third grader moves up to the fourth grade where she longs for a new best friend.