Ivy and Bean and the ghost that had to go 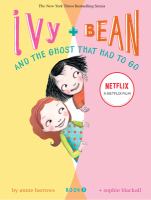 Book
Second-graders Ivy and Bean set out to expel the ghost who is living in the girls' bathroom at their school.