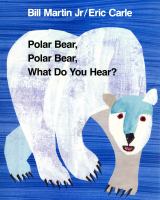 Zoo animals from polar bear to walrus make their distinctive sounds for each other, while children imitate the sounds for the zookeeper.