Everybody's revolution : a new look at the people who won America's freedom 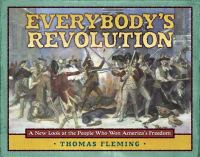 Book
A history of the American Revolution, focusing on the roles played by women and various other ethnic groups.