Be water, my friend : the early years of Bruce Lee 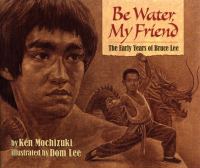 "A biography of Bruce Lee focusing on his early years in Hong Kong, where he discovered martial arts and began developing the physical and mental skills that led to his career as a legendary martial artist and film star"--Provided by publisher.