Mythbusters : the explosive truth behind 30 of the most perplexing urban legends of all time 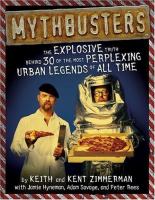 The hosts of the hit television series MythBusters go behind the scenes to provide the real story of thirty of our most baffling urban legends, explaining how they use modern-day scientific principles and methods to document what is fact and what is fiction, in a volume that includes illustrations, photographs, blueprints, and interviews to document the process. Leave no urban myth untested. Could you kill someone by dropping a penny from a skyscraper? Can an unsuspecting scuba diver be sucked out of the water by a firefighting helicopter and get spit out in the middle of a forest fire? Can you save yourself in a plummeting elevator by jumping just before it hits bottom? Special effects experts Jamie Hyneman and Adam Savage, hosts of the Discovery Channel's top-rated MythBusters, use modern-day extreme science to show you what's real and what's fiction. With photographs, illustrations, blueprints, and exclusive interviews to document the mythbusting process, MythBusters: The Explosive Truth Behind 30 of the Most Perplexing Urban Legends of All Time will examine dozens of urban legends, from exploding toilets to being buried alive -- these guys have tested them all. Eye-opening, jaw-dropping, and even laugh-inducing, this book will delight armchair scientists, curious readers, and fans of the show alike. Keith and Kent Zimmerman are the New York Times bestselling coauthors of Hell's Angel and The Best Damn Sports Book, Period, among others.