There was an old lady who swallowed a fly 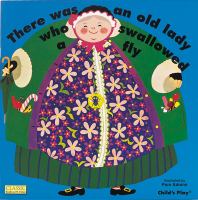 An illustrated version of the cumulative folk song in which the solution proves worse than the predicament when an old lady swallows a fly. Some pages are die-cut, permitting a portion of the next illustration to be seen.