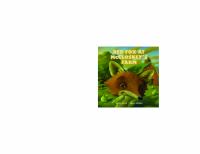 Illustrations and rhyming text relate the details of Red Fox's failed raid of the henhouse at McCloskey's Farm.