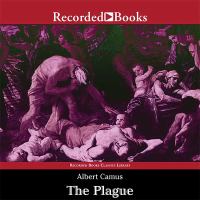 In the small coastal city of Iran, Algeria, rats begin rising from the filth only to die as bloody heaps in the streets. And just as mysteriously as it appeared, the rodent problem seems to vanish. Shortly after, hoever, many local residents experience intense fevers and then perish--victims of the unseen menace of the bubonic plague. And as life in the town comes to a halt, the survivors attempt to come to terms with their own mortality and the rigors of isolation.