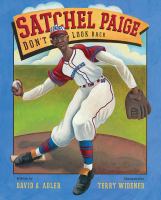 Satchel Paige was one of the greatest pitchers in baseball. Take a look at his life and his struggle to be accepted into the major league.