The Wright brothers and the airplane 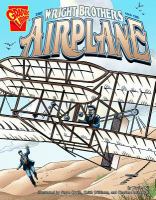 Book
"In graphic novel format, tells the story of how Wilbur and Orville Wright developed, tested, and successfully flew the first powered airplane"--Provided by publisher.