The old woman and her pig : an Appalachian folktale 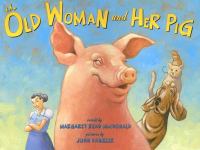 Worried that Little Boy will be frightened if she fails to return home before dark, an old woman enlists the aid of some passing animals to coax her new pig across the bridge.