Silent night All through the night 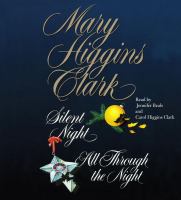 Silent night: When her husband is diagnosed with leukemia, Catherine Dornan and their two young sons accompany him to New York, during the Christmas season, for a life-saving operation. Hoping to divert them from worry about their father, Catherine takes the boys to see some of the city's Christmas Eve sights. When they stop to listen to a street musician, Brian, the younger boy, sees a woman find his mother's wallet, which also holds a precious family memento he believes will save his father's life. Unable to get his mother's attention, Brian follows the woman into the city's subways--beginning a journey that will threaten his life and change that of his mother and of the woman as well.
All through the night: Alvirah, the lottery winner turned amateur sleuth, and her husband, Willy, are caught up in a Christmas mystery that calls on all of Alvirah's deductive powers--as well as Willy's world-class common sense.