The astonishing life of Octavian Nothing [traitor to the nation] 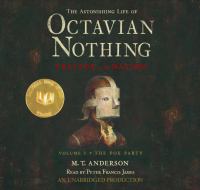 Octavian Nothing is raised by a group of rational philosophers known only by numbers. He and his mother are the only people in their household assigned names. Young Octavian begins to question the purpose behind his guardians' fanatical studies, only after he dares to open a forbidden door does he learn the hideous nature of their experiments.