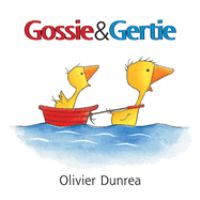 Gossie and Gertie are best friends and everywhere Gossie goes, Gertie goes too--except when she doesn't, and sometimes that's even better.