Fergus and the Night-Demon : an Irish ghost story 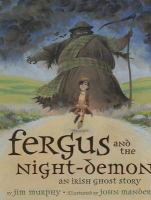 Book
On his way to town to have some fun, a lazy but clever young man faces a terrible demon, who declares that his time has come.