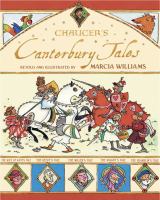 A retelling in comic strip form of Geoffrey Chaucer's famous work in which a group of pilgrims in fourteenth-century England tell each other stories as they travel on a pilgrimage to the cathedral at Canterbury.