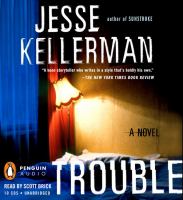 Jonah, a medical student in New York City, saves a woman being attacked on the sidewalk. He kills the attacker and is thrust into the spotlight by the media.