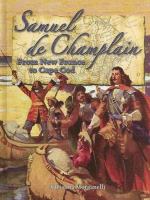 Book
Follows the footsteps of Samuel de Champlain in his mission to colonize what would later become Quebec. Illustrations and maps follow his trek from Cape Breton to Cape Cod and the lake that now bears his name.