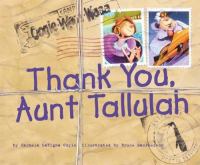 Book
The many mishaps of Bettina, who is attending summer camp, and her Aunt Tallulah, who is living at the South Pole, are described in the letters they exchange.