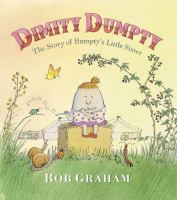 Humpty Dumpty's little sister is too shy to be part of her family's circus act, but she finds courage when her brother needs her help. What happened to Humpty Dumpty is the stuff of legend. But how many know of his brave little sister? While the Tumbling Dumpties, the family traveling circus troupe, is doing acts of spectacular daring, Dimity stays far from the spotlight, playing tunes on her tiny flute. But when Humpty falls off the wall where he's writing graffiti, it's Dimity who finds her voice and brings help that even the king's soldiers can't provide. With a wealth of humorous visual details - the egg-carton caravan drawn by a chicken, the bandaging of Humpty's "leakage" after his fall.