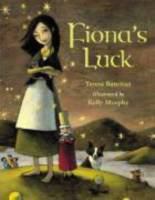 Book
A clever woman named Fiona must pass the leprechaun king's tests when she tries to get back all the luck he has locked away from humans.