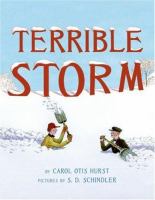 A child's two grandfathers relate their boyhood experiences of the "terrible blizzard of 1888," during which each was stuck for three days doing what he disliked the most.