The double bind [a novel] 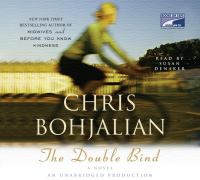 Laurel Estabrook life changes drastically after being attacked. She goes from being outgoing to withdraw, her photography and work at a homeless shelter are now her life. Laurel meets Bobby, a mentally ill man, at the shelter with a box of photos he won't let anyone see. When he dies she discovers that he photographed celebrities. Laurel becomes obsessed and searches for the truth of his former life.