S is for shamrock : an Ireland alphabet 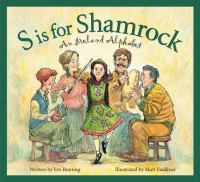 From A to Z, Ireland is presented in poetry, prose, and illustrations. Topics include Blarney Stone, Finn McCool, fairy rings, and shamrocks.