On the wings of heroes 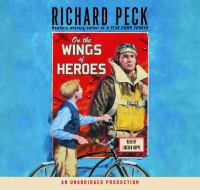 Davy Bowman's a boy growing up during World War II who's heroes are his father and older brother who flies B-17's.