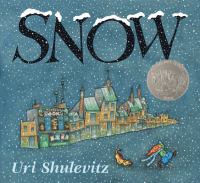 As snowflakes slowly come down, one by one, people in the city ignore them, and only a boy and his dog think that the snowfall will amount to anything.