The alchemyst [the secrets of the immortal Nicholas Flamel] 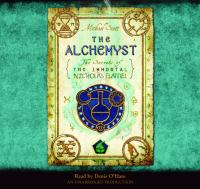 While working at pleasant but mundane summer jobs in San Francisco, fifteen-year-old twins, Sophie and Josh, suddenly find themselves caught up in the deadly, centuries-old struggle between rival alchemists, Nicholas Flamel and John Dee, over the possession of an ancient and powerful book holding the secret formulas for alchemy and everlasting life.