The princess and the pea 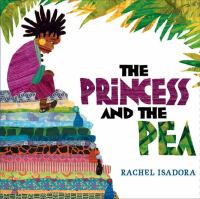 Book
A simplified version of the tale in which a girl proves that she is a real princess by feeling a pea through twenty mattresses and twenty featherbeds.