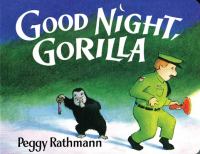 An unobservant zookeeper is followed home by all the animals he thinks he has left behind in the zoo.