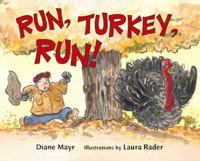 Book
The day before Thanksgiving, Turkey tries to disguise himself as other animals in order to avoid being caught by the farmer.