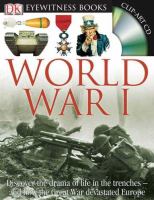 Book
Provides an eyewitness account of the war that devastated Europe, from the assassination of an archduke to the killing fields of France. New Look! Relaunched with new jackets and 8 pages of new text! Here is an original and exciting guide to the grim challenge of life or death on the Western Front. Devastating first-hand reports and contemporary photographs of the battles that slaughtered millions, together with a clear account of how nation upon nation sent their men to join the carnage, combine to present a dramatic "eyewitness" view of this most terrible war. See the bullet-riddled car of the heir to the throne of Austria-Hungary, everyday life in the dugout, sappers mining tunnels beneath the enemy, and Mata Hari learning the art of spying. Learn how people avoided gas attacks, when periscopes were used, what soldiers wrote home to their sweethearts and mothers, the best way to use a tank, how troops flattened a hillside, and the meaning of Armistice Day. Discover how it felt to go over the top, what happened to all the bodies, how people dealt with shell shock, why war led to revolution, and much, much more.