And the winner is-- 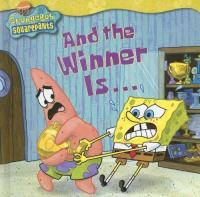 Book
SpongeBob, winner of numerous awards, gets very annoyed when his friend Patrick starts copying him in an attempt to become a winner also.