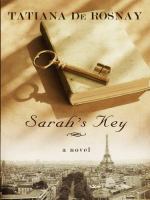 While writing an article about the French collaboration with the Nazis, journalist Julia Jarmond stumbles onto a trail of long-hidden family secrets that connect her to a ten year-old girl, Sarah, who was brutally arrested with her family by the French police in the Vel' d'Hiv' roundup, but not before she locked her younger brother in a cupboard in the family's apartment, thinking that she would be back within a few hours.