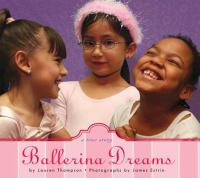 Book
True story of five little girls with cerebral palsy or other physical disabilities who were determined to become ballerinas.