The man in the brown suit 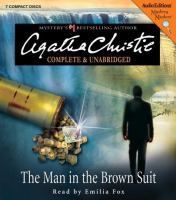 "Anne Beddingfield wants a little adventure in her life, now that her father has died and left her alone in the world. But she gets more than she bargained for when, at the tube station, she sees a man fall onto the track and die. A man dressed in brown, claiming to be a doctor, pronounces him dead, then rushes from the scene, leaving a scrap of paper behind. The police call it an accident, but Anne, armed with the scrap of paper, decides to investigate on her own. The case takes her from England to South Africa on a trail of stolen diamonds, and puts her life in jeopardy."--container.