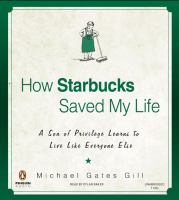 When Michael Gates Gill lost his job that provided him with a six-figure salary, he lost his house and his family. He took a job at Starbuck's and learned that the job wasn't as easy as it looks.