Where, oh where, is Santa Claus? 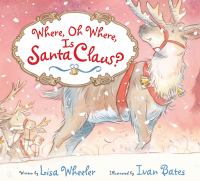 Book
Santa Claus is missing, and a host of arctic animals searches for him in the snow.