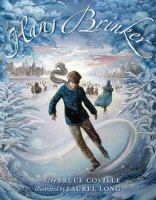 Book
A Dutch brother and sister work toward two goals, finding the doctor who can restore their father's memory and winning the competition for the silver skates.