Henry, the dog with no tail 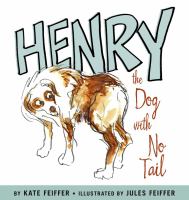 Book
Envious of the other dogs that have tails, Henry goes in search of a tail of his own, but in the end he decides he is happy the way he is.