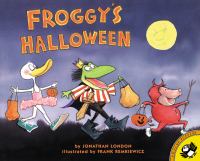 Book
Froggy tries to find just the right costume for Halloween and although his trick-or-treating does not go as he had planned, he enjoys himself anyway.