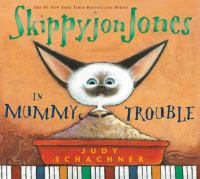 Skippyjon Jones, a Siamese kitten who thinks he's a Chihuahua, dreams of traveling to ancient Egypt with his gang of Chihuahua amigos.