There's nothing to do on Mars 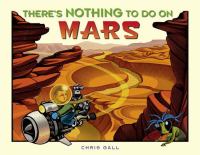 Book
After moving to Mars with his family, Davey complains of being bored until he begins exploring the planet with his dog Polaris and uncovers a most unusual "treasure."