My friend, the starfinder 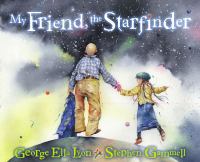 Book
A child relates some of the wondrous tales told by an old man who once found a falling star and stood at the end of a rainbow.