You wouldn't want to be Mary, Queen of Scots! : a ruler who really lost her head 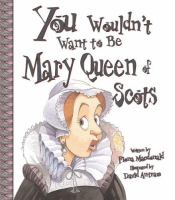