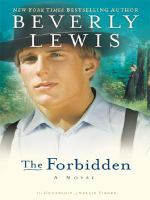 Longing to marry Caleb Yoder even though Caleb's father has forbidden him to court her, Nellie Fisher struggles with her feelings as she continues to cope with the death of her sister, Suzy.