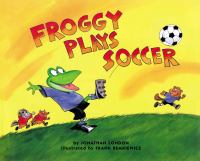 Book
Although Froggy is very excited when his Dream Team plays for the city soccer championship, he makes a mistake on the field that almost costs the team the game.