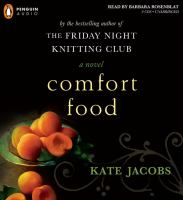 From the New York times best-selling author of The Friday night knitting club comes a delectable new novel about food, family, and second chances. Augusta "Gus" Simpson, a Martha Stewart-esque TV cooking personality, has come a long way since her husband died suddenly, leaving her to raise and support their two daughters on her own. Channeling her grief into hard work, she carved a successful career out of her natural talents as a chef and hostess. But now, as she approaches 50, she finds that her well-earned turf may not be as secure as she thought. A hot young Latin beauty queen with a flair for spices and an ambition for stardom is threatening to steal her spot on the Cooking Channel. As Gus struggles to remake herself for a new age of media, she discovers that her entire life may need a makeover, including her relationship with her daughters and, perhaps, another chance at romance.