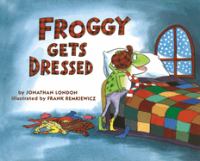 Book
Rambunctious Froggy hops out into the snow for a winter frolic but is called back by his mother to put on some necessary articles of clothing.